Aquatic plants are plants that can complete their life cycle in standing water, in lakes, rivers, wetlands or marine habitats, or growing in hydric soils, which are soils that are saturated with water and become anoxic. Some plants such as Ceratophyllum, which floats free in the water column in ponds and lakes with no portion of the plant exposed to air, are unambiguously aquatic,

but borderline cases exist, such as Sarracenia (the North American pitcher plants), which grow rooted in wet soil that might not always be completely saturated, a habitat which some authors might consider not to be truly aquatic.

Plants with adaptations to aquatic habitats have arisen in numerous unrelated lineages.

The majority of species are angiosperms (flowering plants), but there are also specialized aquatic mosses and liverworts, some conifers that are confined to wetland habitats like Chamaecyparis thyoides (Atlantic White Cedar), aquatic ferns like Azolla and Ceratopteris, as well as a genus of aquatic lycopods, Isoetes.

Aquatic plants can be divided into several subgroups based on their growth habit and ecology. Benthophytes refers to plants that are rooted into the substrate. Submergent benthophytes like Elodea have leaves that grow completely below the water surface.

Planmergent benthophytes like Nymphaea (water lilies) produce leaves that float at the surface. Emergent benthophytes are plants such as Typha (cattails) have self-supporting leaves and stems that grow above the water surface. Pleustophytes are aquatic plants that float unattached to any solid substrate, in some cases lacking roots entirely. Acropleustophytes, or free-floating aquatics, are buoyant and float at the water surface (e.g. Wolffia or Pistia). Mesopleustophytes, a.k.a. suspended aquatics, such as the Humped Bladderwort, Utricularia gibba, drift submerged in the water column.

The ecological constraints on aquatic plants are often radically different from those that act on terrestrial plants, and aquatics have evolved a number of specialized adaptations to watery habitats. Submerged leaves are thin or finely dissected (e.g. Ceratophyllum), with a very high surface area to volume ratio, in order to facilitate gas exchange, which is much slower in water than in air. Submerged leaves also show anatomical and physiological adaptations to low light levels, since sunlight intensity drops off rapidly with increasing water depth.

Aquatic plants of marine environments, including mangroves like Rhizophora, may have glands on their leaves to secrete excess salt.

The stems, roots and leaves of many aquatic plants contain aerenchyma, spongy tissue that contains unusually large air spaces. Some acropleustophytes, such as Eichhornia (Water Hyacinth), use aerenchyma for flotation.

Often, the function of aerenchyma seems to be the transport of gasses. Emergent or planmergent benthophytes move oxygen from their leaves and the atmosphere through aerenchyma down to their roots, which enables the roots to function in anoxic sediments. Conversly, carbon dioxide from the roots can diffuse through aerenchyma to the leaves, where it is used for photosynthesis.

NOTE: Some of the aquatic plants in the collections are considered invasive and are not kept on display in public areas. Those needing access to restricted material for research or teaching should inquire with the greenhouse staff. 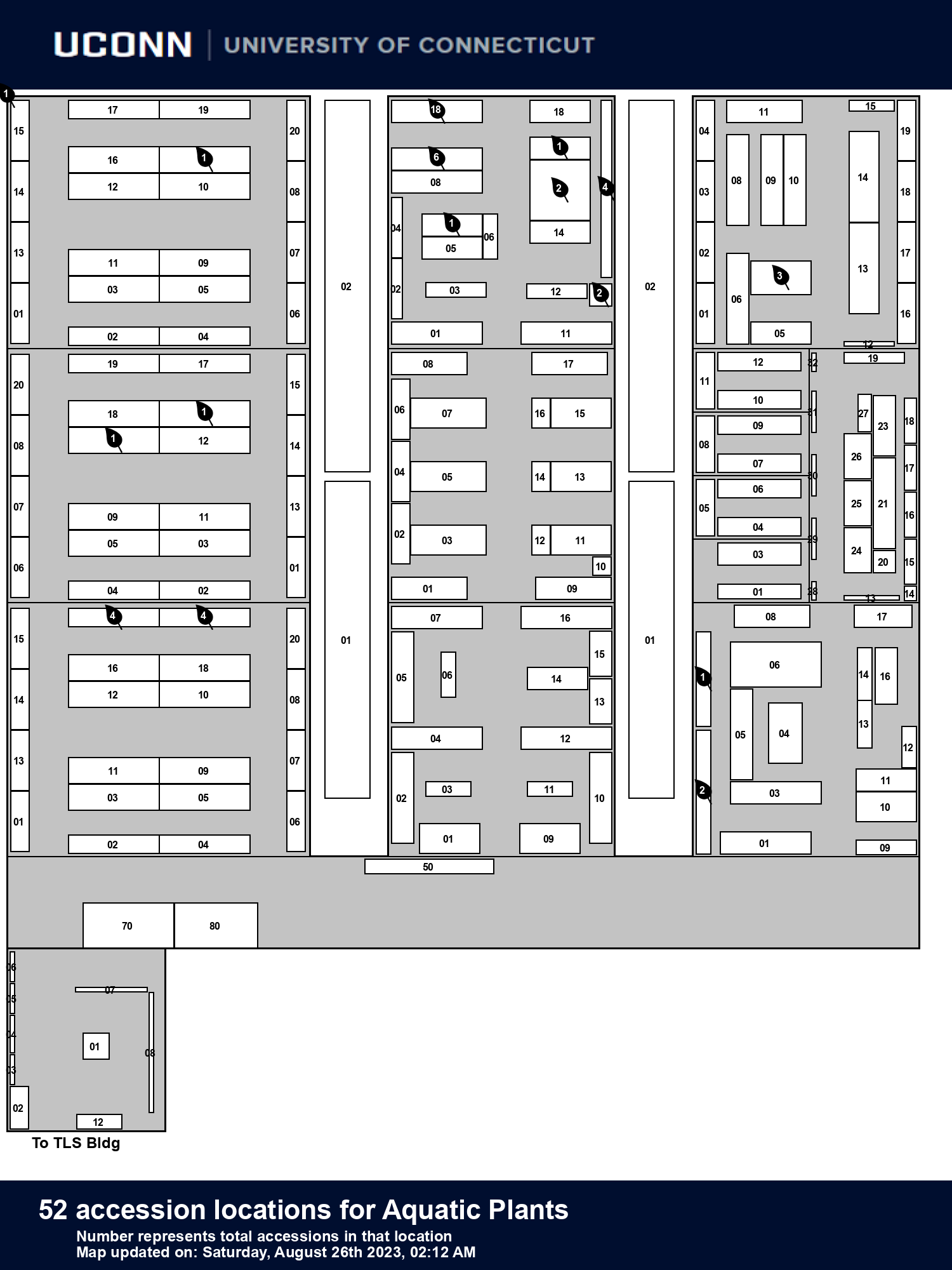 = map available for this accession

= voucher(s) on file at CONN for this accession

= accession added within past 90 days